I love indexes. They’re like spreadsheets in disguise, (and as previously established, I love spreadsheets). So when I was reading Henry Mackenzie’s Man of Feeling (1771) for my special fields exam, and I noticed that the Victorian edition digitized for Project Gutenberg included an “index to tears” for the novel… well, I got a little carried away.

The index itself provides the page numbers on which characters cry, and a brief extract from the novel’s description:

This index is provided “as guide to persons of a calculating disposition,” which I most certainly am. Accordingly, I immediately made a timeline of the tears in the novel, to see which parts were the weepiest:

I’m honestly not sure whether this represents a novel with a “even” distribution of tears. There are clusters of crying, and some longish stretches of dry eyes, but I could imagine more skewed distributions. A tragedy, for example, might put all its tears at the end. The data of just one book is inconclusive.

Some clusters do become more pronounced when each incident is colour-coded based on who is crying:

We have some introductory crying of various sorts; then two distinctive “episodes”, one centred around a prostitute, and one centred around an an old man named Edwards; then trailing off with more assorted minor-character crying as the narrative draws to a close. The emotional crux of the novel, by this model, appears to be the story of Edwards reuniting with his orphaned grandchildren, an encounter which gets everybody crying (in contrast with the more single-focused crying of Harley’s two encounters with pitiable women), and one which lasts a lot longer.

(I have since discovered, incidentally, that the Edwards’ story circulated independently as an extract from the novel — which thus “represents” Man of Feeling based on the part that is densest with tears. Now I want to chart the crying in other sentimental novels, and see if their cryingest bits were also the bits that circulated the most! Could mapping tears predict novelistic excerpting in this genre?)

Also interesting to me, however, is how little crying there is in other parts. Our protagonist doesn’t cry until nearly a quarter of the way through the novel, though he makes up for it by going hard for several pages when he does. Harley spends a lot of time surrounded by his fashionable exploits and picaresque scrapes in the city of London, which involve no crying, and which surprised me in a novel that I expected to take a different tone.

The tears are also marginalized in the work’s conclusion. The narrative builds to the lachrymose crescendo of old Edwards, but then it… keeps going, and limps on unevenly through another story, a political tirade, a love plot, and a huge timeskip before ending somewhat abruptly. The tears clearly matter, but they also don’t structure the work as a whole.

All of those thoughts are just from working with the index as given. But not all tears are alike. To dig into some of the details, I looked up each instance and made a small spreadsheet, annotating each outburst with more information on who is crying and why. This, too, began as a joke, but led me down some interesting interpretive paths. 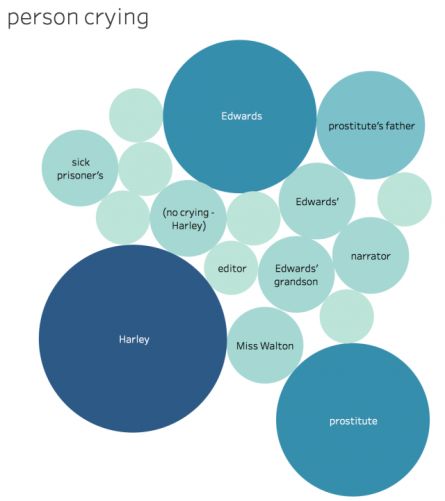 Harley emerges as our crier-in-chief, with Edwards and the unnamed prostitute — the central figures of the two substantial crying episodes visible in the timeline above — tied for second place. 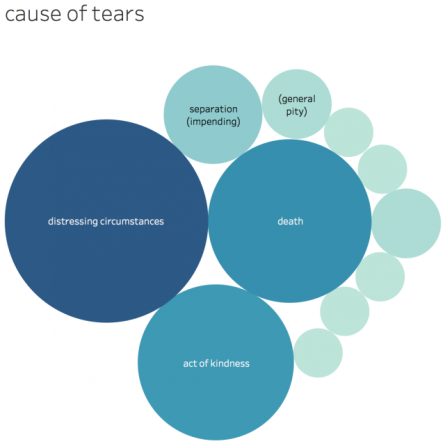 People mostly cry about bad things that are happening or about to happen… except that there is also a substantial pool of tears inspired by gratitude.

Those two basic observations get extra interesting when they start correlating. For example, a look at what causes each characters’ tears: 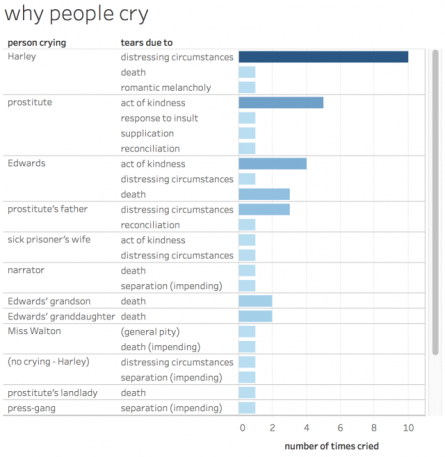 Harley cries exclusively due to bad things happening. The vast majority of his tears are the direct response to someone else’s distressing circumstances (though he makes time for some romantic melancholy too). Edwards and the prostitute, however, our next most prominent criers, cry the majority of their tears in response to kindness. So the chief crying episodes in the novel are centred around Harley expressing his pity for someone by crying at their distressing circumstances, and the person is distress joining in his tears out of relief at his sympathy or gratitude for the money and goods he distributes.

These different modes of crying are reflected in an examination of the objects or causes of people’s tears: 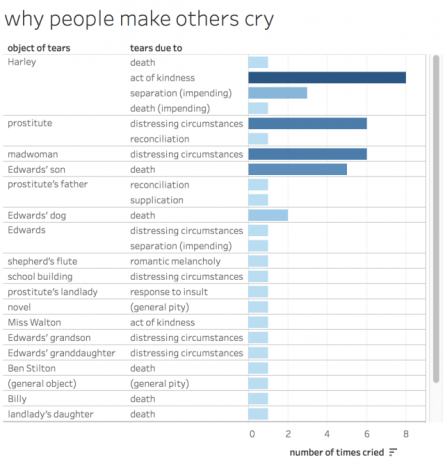 Harley makes people cry by being kind to them. Everybody else makes people cry by being in distress, or by dying. A lot of names show up here that didn’t show up anywhere else, of people (or dogs!) whose remembered deaths bring a tear to the eye of a character while other things are going on. It’s particularly interesting to me that many of these remembered dead have names (Ben Stilton, Billy) when the madwoman — who also emerges here as a prominent figure for the first time — does not.

Harley’s elevated status as our titular Man of Feeling, then, seems to have its foundations not in melancholy, but in benevolence. His sympathy serves as a catalyst for tears, and as a catharsis. I’d love to know how he compares, in this model, to his sentimental peers; I’m almost curious enough to write my own Index to Tears for The Vicar of Wakefield. But perhaps after my exam.